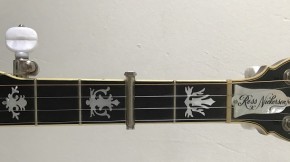 Banjo Capo Advice - How and When to Use a Banjo Capo

The banjo or guitar capo is sometimes called a “cheater.” In a sense it is, but it doesn’t make you a poor musician to use it. In fact, in bluegrass banjo playing, many times it is proper. By using the capo, we are able to play everything we know in open G tuning; by simply placing the capo on another fret, we change the key. For those of you who are new to this, I made a little chart to help you at the bottom of the page.

I do not recommend using the capo above the fifth fret because it’s like cutting the neck in half. I recommend playing in the key of D without a capo, it has a great tone and many uses. Playing in C without a capo, I think, is a preferable technique in most cases as well.

One of the things we should consider when determining whether to use a capo or not is open strings. In most cases, the more open strings we have to work with the better. That is why, in many instances for the best sound for bluegrass songs in keys other than G, it is best to use a capo. This holds true for the right reason “it sounds better” and even supersedes having the technical knowledge and ability to play every note of a song in Bb, for instance, without a capo.

When playing up-tempo traditional style bluegrass in the keys of A, Bb, and B, I recommend using a capo. In other types of songs in these keys, it could be appropriate and preferable not to use a capo, depending on the sound or feel you desire, but, generally speaking, in bluegrass you would use one.

When playing songs in the keys of G, C, D, or F at any tempo, I recommend playing out of open G.

When playing in the key of E, I normally don’t use a capo but tune my fifth string to high B or F#. However, capoing to the 2nd fret and playing as if you were in the key of D (in G tuning) can sometimes produce the sound you want.

Again, producing the sound you want should be the priority and a determining factor in capo use, not ego on how smart you are for not using one. I will admit I wish I never had to use one. They make tuning more complicated. I played electric guitar in a band for awhile and I tuned once or twice a night. Using the capo will create tuning havoc if you let it. Next are some tips on types of capos and tuning when using a capo.

Types of Capos and Tips on Using Them

I began playing in the days of the “Bill Russell Double Action” capo that used stretched elastic. They were a pain and could really pull the strings out of tune if you weren’t careful. The type of capos that are used today are the ones that allow you to adjust the tightness of the capo against the strings. This is important because tightening the capo too much will cause the strings to go sharp, and, of course, not enough pressure will cause the strings not to ring fully. I recommend placing the capo close up against the fret and tightening just enough for the strings to sound clearly.

A good way to attach the capo is to push the capo bar against the strings straight on (being careful not to push or bend the strings) and hold it there with your right thumb while you tighten the screw with the left hand. After you have the capo in place, get out your tuner and see where the strings ended up. If you’re lucky, you’ll still be in tune. More likely, however, you will need to make a small adjustment or two.

Take note of what happened to each string and write it down so next time you’ll know what to expect. If a string or two went sharp, before you start turning pegs, push on the string up near the bridge and see if that straightens it out. Many times that will push the string back where it belongs.

The trick here is to learn how your banjo tuning reacts with a capo at each fret. Take the time to practice and study how to tune quickly and effectively with a capo. If you learn good capo placing and tuning technique, you’ll have a much more enjoyable experience at the gig or jam without the hassles of tuning or, even worse, playing out of tune.

Your banjo should be equipped with spikes to put the fifth string into in order to raise the pitch of the fifth string since the capo will not be covering it. These spikes were introduced by some genius. They are actually railroad spikes from small HO hobby train sets. They work great and have made the sliding capos from my era obsolete.

You will likely have to fine tune the string after sliding it under the spike. The best way to quickly tune is to drop the string flat at least a half-step and bring it back up slowly and steadily until you reach the correct pitch. No complaint with these spikes! The old-timers must have re-tuned the string every time they used a capo and probably broke a few in the process too. 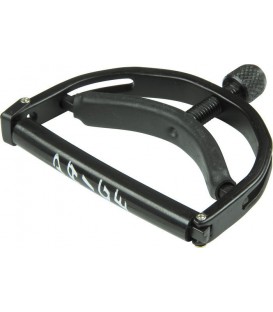 Paige Capo for Banjo - All Sizes and Radius 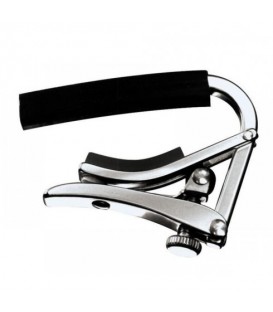 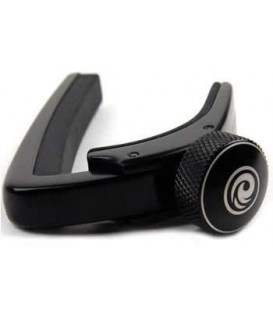 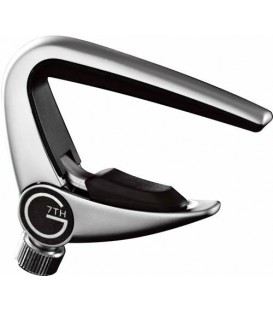 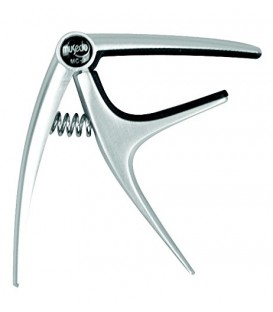 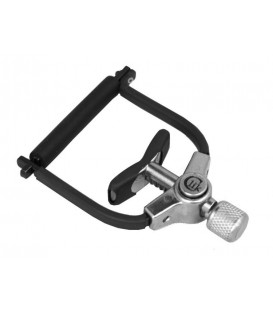 Paige "CLIK" Capos for Banjo - All Sizes and Radius