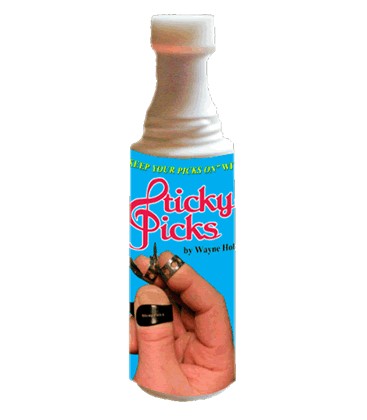 Sticky Picks - Keeps your finger picks from coming off!

This is a great new innovation invented to keep your finger picks from coming off. It works on thumbpicks too. It sure beats squeezing your picks on too tight or wearing a thumb pick that is too small for you. This product will work great for banjo players too or for any picker that uses thumb or finger picks. Ross Nickerson

It does exactly what it was designed to do ... holds your finger & thumb picks on while playing

Keep Your Thumb and Finger Picks on with Sticky Picks

Sticky-Picks is a specially formulated solution designed to help hold on thumb and finger picks while performing or practicing on many types of stringed instruments.

Worrying about your picks falling off during a show, can lead to a less than top-notch performance. Even if playing music is just a hobby, you will enjoy it far more without thinking about your picks popping off. Now there’s Sticky-Picks…and the confidence it provides.

15 day satisfaction guarantee on ALL Banjo Supplies. Try it and if for any reason you want to exchange or return, No Problem!

Who invented Sticky Picks? Wayne Hobbs did!
As you will see in reviewing his vast musical experience, Wayne Hobbs knows how important it is to "keep your picks on"! He is the steel guitar player that played behind some of this country's top artists! For years, his paychecks were signed by such musical greats as Barbara Mandrell, Connie Smith, Marty Robbins, Jerry Lee Lewis, Don Ho, Johnny Paycheck, The Forester Sisters, Bill Anderson, Billy Walker, Jean Shepard, and Bailey and the Boys - just to name a few. His music career has spanned over 35 years, performing on the Grand Ole Opry and top television shows such as Andy Williams, Pop Goes the Country, Austin City Limits, Solid Gold, The Mike Douglas Show, Hee Haw, Good Old Nashville Music, Nashville Now, and the Grand Ole Opry Television Show. He has had the honor of performing for two standing presidents, George Bush Sr. and Gerald Ford. Currently Wayne continues to be in demand for studio session work. He also still makes time to do many live performances.

Through his years of playing professionally, Wayne realized the importance of finger picks staying in place, especially when playing an important gig. He saw a need to invent something that everyone could use that would help keep finger picks securely attached to their fingers. He personally experimented with many different approaches, from using tapes, rubber coated picks, to ointments, to actually squeezing the metal picks until they cut his fingers. Wanting a simple, yet effective way to accomplish this, Wayne and his wife Terry set out to find a simple, inexpensive solution. They can now offer you Sticky-Picks….and the confidence it provides!

What our customers say